“We’ve always been storytellers and the first time we’ve used Landbot in our platforms was precisely for telling a story of one patient. After going through it, we’ve received emails from people saying it was an amazing experience and thanking us for this!” 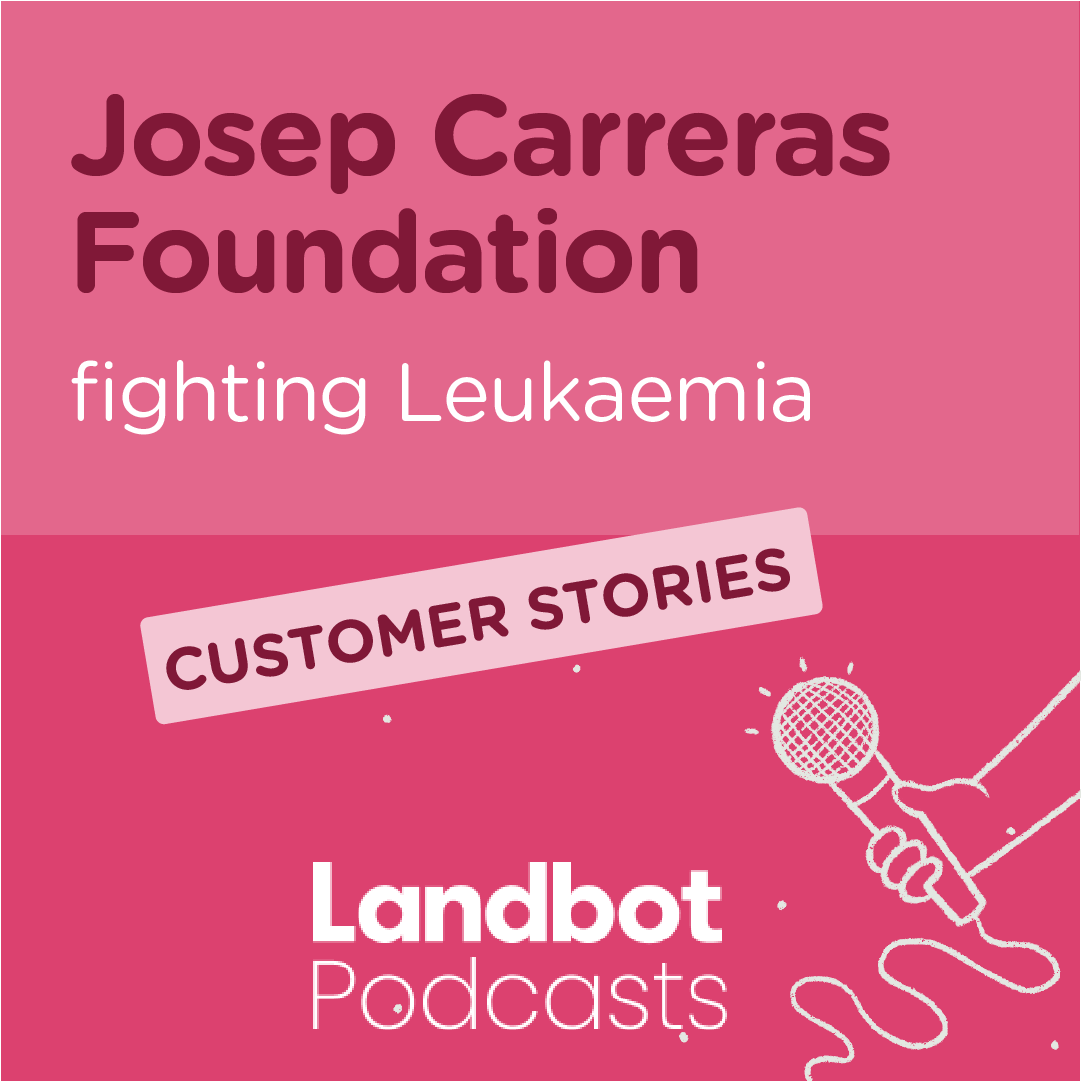 hosted by Cris Villar
Landbot's Co-founder & Head of Customer
Using Storytelling To Help Leukaemia's Fight With A Single Objective: That Leukaemia Will One Day Be 100% Curable.
Podcast in spanish 🇪🇸

The Josep Carreras Leukaemia Foundation is a private, charitable and non-profitable organization, founded by the tenor José Carreras following his recovery. Carreras founded the Foundation on July 14, 1988.
‍
Website: fcarreras.org

The legendary tenor Josep Carreras has a storied career that stretches back to the 70s.

As one of the Three Tenors alongside Plácido Domingo and Luciano Pavarotti, he not only made part of a new global pop-culture phenomenon but has sold over 85 million records worldwide to go along with the wins: Grammys, Emmys and other major international awards. Even a battle with acute lymphoblastic leukaemia, which was possibly his biggest battle and victory.

His motto might be the final word of the most famous of all the tenor arias “Vincerò!”, I will win!

In 1988, following his recovery from leukaemia, Carreras wanted to repay the doctors who’d saved him and do something for other leukaemia sufferers throughout the world, so he established the José Carreras International Leukaemia Foundation in Barcelona with branches in the United States, Switzerland and Germany.

Every year, 6400 cases of leukaemia are diagnosed in Spain and in total more than 30,000 blood cancers. It accounts for 30% of childhood cancers and there are 300 new cases in Spain every year. 80% are acute lymphoblastic leukaemias. Blood cancers, especially leukaemia and lymphomas, are considered the gateway to the ultimate cure for cancer.

says Alexandra Carpentier, Head of Patient Program and Digital Action at José Carreras International Foundation for the Fight against Leukaemia.

Only 30 percent of patients will have a family member whose cells are a full match, therefore, the possibility of carrying out bone marrow transplants between unrelated individuals opened new hopes for increasing the proportion of definitive cures of leukaemia, which justified the setting up of the register by the Carreras Foundation.

When Cure Is The Goal

Following three decades of work, a new challenge has emerged.

In 2010, the Josep Carreras Foundation, together with the Generalitat de Catalunya (Government of Catalonia), launched a groundbreaking and unparalleled project.

The Josep Carreras Leukaemia Institute is the first European researchcenter dedicated exclusively to leukaemia and other malignant hemopathies, and one of the few in the world, which, through the work and rigour of researchers from around the world, employs the most revolutionary technologies to take the lead in the battle against leukaemia.

The Josep Carreras Leukaemia Research Institute was born out of the tenor's own determination, not only of promoting the fight against leukaemia but also to improve patients' quality of life and, above all, find a definitive cure for leukaemia.

Diagnosis of blood cancer can lead to a severe amount of stress in any family.

Normal life is challenged and often disrupted as parents and caregivers find themselves managing the rollercoaster of the patient’s diagnosis and treatment. In addition, there will be times of separation from family members for periodic hospital stays. As Alexandra describes,

The Josep Carreras Foundation offers a free medical advice service, as well as accommodation for patients with limited financial resources who must travel long distances away from home for their medical treatment. Since its inception, the Foundation has attended 30,000 medical and patient information consultations and 400 patients have been able to stay, together with their families, in one of the 6 floors that it offers.

With family and friends support, hearing the stories of other survivors, mental health services and others, many people who have survived leukaemia will succeed despite the difficulties they face.

The Power of Stories

Whether we’re reading stories or writing them, or both, they’re a way to share experiences with others, a way to understand history and a way to feel connected. This is the power of great storytelling.

We’ve always been storytellers and the first time we’ve used Landbot in our platforms was precisely for telling a story of one patient.

This particular story was a long one and, before Landbot, we decided we would turn it into a book because it was really great. Initially, though, I thought this was going to be too long for a bot and that people wouldn’t dare to go through it, but it turned out to be the opposite! We’ve received emails from people saying it was an amazing experience and thanking us for this!

The Josep Carreras Foundation is financed solely and exclusively thanks to their 108,000 partners and collaborating companies.

‍Do you wanna be part of the unstoppables against leukaemia? Click here.

Pedro Marques
Brand & Communications Strategist at Landbot. Pedro is a natural idea generator & specializes in questioning everything we do inside our Marketing team so we all kind of listen carefully 🧐

From Coaching to speed with Ablers

Enabling, stimulating and encouraging companies, teams and individuals to take their potential to the next level is ablers’ bread and butter.

Liverpool & the power of a citizen-centric approach

Liverpool city council uses landbot to provide better and faster support to their community and residents.

Interacting and telling stories in a meaningful way to help understand the story behind the need.